Story behind the model

On 18 May 1943 4. Stormo C.T. based at the Ciampino airport got its first two Bf 109s and began preparations for the changeover to the German fighters, although ultimately this did not happen and their Messerschmitts were finally transferred to 23 ° Gruppo CT (70ª, 74ª, 75ª Squadriglia) 3 ° Stormo, based at the airport Cerveteri, Lazio region, where they arrived in July 1943. A total of 11 Bf-109G, which had replaced, or maybe rather complemented, the Macchi C.202 Folgores (taking into account that on 8 September 1943 some Macchis were still on the register of 23 ° Gruppo).

Until the ceasefire of 11 Messerschmitts there was probably no one left (although some sources indicate that at the beginning of September, one of them was still in service), because available reports of Regia Aeronautica on 8 September 1943 listed for the 23 ° Gruppo only the aircraft of Italian production.

and of course a lot of other books and webpages related generally to the type, as well as information and suggestions from PWM.org.pl and Modelwork.pl forums users, which I appreciate very much.

There is probably only one picture of this plane, showing the left side of it. 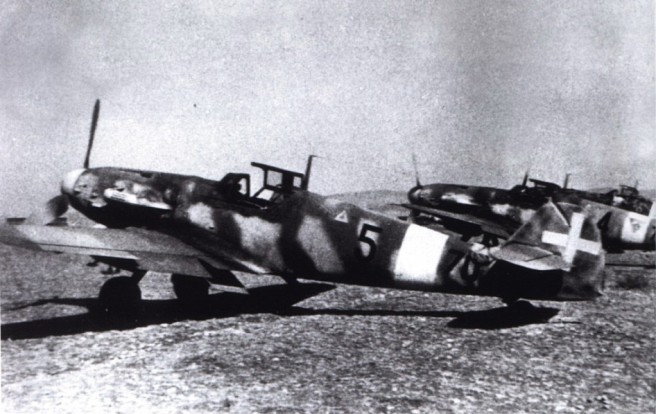 Despite the efforts I was unable to find out the name of a pilot, to which the aircraft was allocated. I assume, however, that this was one of gentlemen, which you can see in the photo taken near another plane this Squadriglia, “Nero 4-70,” which can also be seen on the previous photograph of a subject of this gallery.

The model is very enjoyable to build, however at some points a little complicated in terms of engineering. It has also its shortcomings in terms of compliance with the actual aircraft, which can be quite easily overcome if the will is there – anyway to me it looks like a Messerschmitt.

What needs a particular attention in my opinion is:

– the harness, in this scale it is a bit strange thing that it is molded on the seat, but I left it as it is because the cockpit was to be closed;

– upper wings, that really require precision during the assembly to make it fit perfectly.

Painted with Gunze H series paints and Grigio Azurro Chiaro from Italeri (the wings crosses were painted over with this colour), markings airbrushed using Montex masks K32051 Bf-109G6 (Italy) for the Hasegawa kit, the stencils are decals from the box (some silvering despite the use of MarkFit).

I hope that in this painting you will find it interesting. 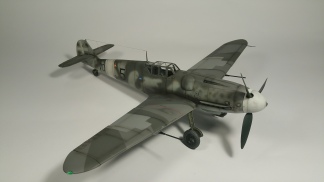 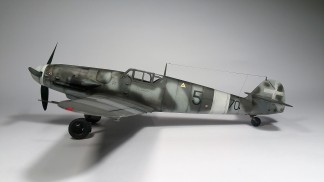 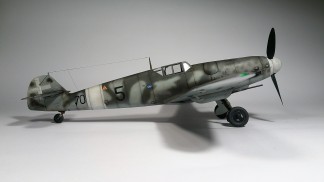 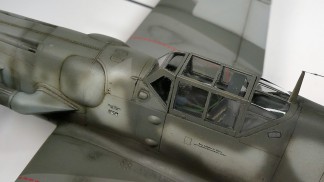